Last year, a Russian version of The Hound of the Baskervilles was released on DVD in the UK. It’s part of a series that’s probably – there’s stiff competition – my favourite screen version of Sherlock Holmes.

The Hound of the Baskervilles is actually the sixth and seventh episodes of an eleven-part series that ran from 1979 to 1986. There is an excellent summary of history of the show here, which fills in a lot of the background and impact it had. The British Government honoured the series’ Holmes, Vasily Livanov with an MBE. He met Mrs Thatcher in Moscow. A statue of him as Holmes (with his Watson, played by Vitaly Solomin) stands close to the British Embassy.

The history and background of the show, then, is fascinating and there are far more qualified people than me to tell you about it, and I’d encourage you to have a good Google around.

I’ll tell you why I love the series. Some of the appeal is definitely the Russianness. The posh men, like Henry Baskerville, are invariably portrayed as decadent capitalist pigs who dress like Mr Monopoly. Victorian London was recreated in Riga, and so occasionally doesn’t look like London at all:

There are places where it looks like a nineteenth century Russian novel, rather than something set in the UK. 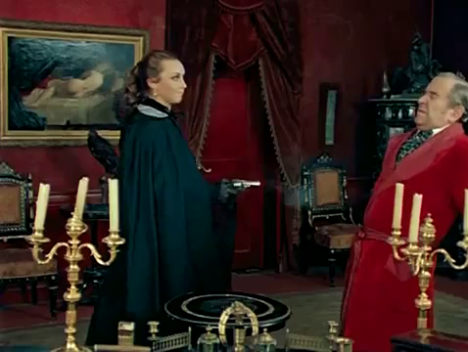 There’s also some real quirkiness. Henchmen look like wolfmen. There are some extremely odd moments. Here’s Watson getting kicked in the nadgers, and if this photo doesn’t make you want to hunt down the show, then I’m not sure what will: 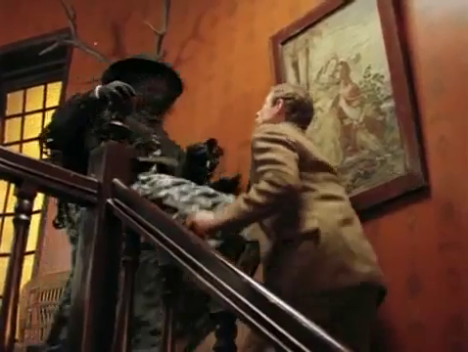 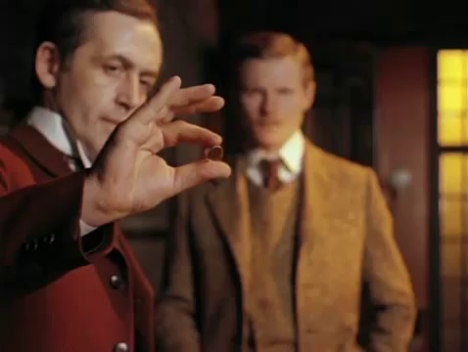 Here’s Holmes and Moriarty at the Reichenbach Falls: 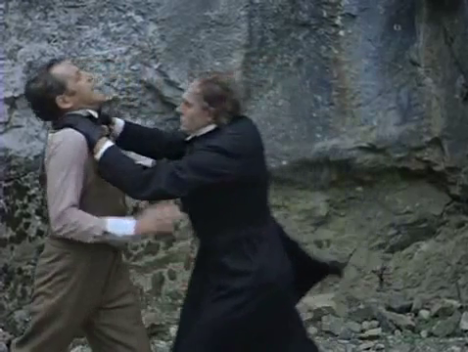 It’s not afraid to play around with the source material. It’s a series. The eleven episodes follow on from each other, and Holmes and Watson are noticeably older and changed by the last episode. The first episode is a pretty faithful adaptation of A Study in Scarlet, but one which plays up Watson’s suspicion of Holmes, who he comes to believe is some kind of master criminal. It’s a pilot episode for a TV show, one that takes pains to establish Watson first, then Holmes, with plenty of Mrs Hudson (who, in this version is a sweet old lady who’s utterly, and playfully complicit in Holmes’ activities, in places becoming almost Alfred to Holmes’ Batman).

The central performances, needless to say, are what makes the show a success. Livanov’s Holmes is instinctively secretive. It’s a Holmes who is very clearly a little mad, but can bottle everything up. We see a lot of things from Watson’s perspective, and Solomin’s portrayal is a very nice balance of a man who’s a little stiff, but extremely smart and utterly reliable.

Most modern versions of Watson are careful to show that he’s not a bumbling idiot, but the ‘strong’ Watsons tend to lapse into being an everyman who’s there just to deliver exasperated variations on ‘oh, what are you up to now?’. There’s always that element of subservience. It’s become typical to have Holmes and Watson as, basically, a relationship where Watson is the least butch soldier you’ve seen in your life and he’s happy to submit to a bullying dom uber-geek. There’s an essay to be had on gender politics, there, and I think instead of the low hanging fruit of queer readings of the relationship, it might be worth looking at how the Cumberbatch and Robert Downey Jnr versions of Holmes appeal to women viewers, how Holmes is portrayed – in very interesting ways – as ‘sexy’. Watson has remained a viewpoint character, is still not sexually attracted to Holmes … but he has been feminised. Elementary just comes right out and makes their Watson a woman, but, y’know, the Robert Downey Jnr version kinda beat them to it by casting Jude Law. Watson is no longer an Everyman, he’s an Everywoman. Discuss.

Anyway, back in the Soviet Union, this Watson – uniquely, I think – isn’t Boswell to Holmes’ Johnson, he’s not looking up at him in the same way at all. It’s a relationship that’s an interesting portrayal of masculine friendship. Holmes actually seems to like Watson, not just see him as a way of explaining how clever he is.

Perhaps the cleverest aspect, though, and one that’s lost a little if you only get The Hound of the Baskervilles, is that a vast number of Conan Doyle stories have been woven into an interesting running story. The eleven episodes are a condensed version of the canon, but they’re happy to chop things up, move them around.

The most interesting example comes right at the end. The last episodes are set noticeably later than the others – suddenly there are cars and telephones. Again, this is perfectly consistent with the original stories. We tend, I think, to see Holmes as being ‘Victorian’ in the sense of Dickens, of him existing in that same chocolate box time of carol singers, gaslight and workhouses. Conan Doyle died fifty years, one month, one day after Dickens. Two generations separate them.

In the last episodes of the Russian series, Holmes comes out of retirement and the series ends with a mash up of pretty much every Conan Doyle story where foreign agents are stealing secret plans (The Second Stain, Bruce Partington, The Engineer’s Thumb and His Last Bow). In the original adventures, Doyle was usually very coy about which foreign power or powers were up to no good, it was a generic way of raising the stakes. Here, though, the enemy is specifically Germany, and it’s a co-ordinated effort. Joltingly, the story is not set in some High Victorian fantasyland, it’s 1914. The Greatest Detective has reached the  eve of the Great War.

It is, of course, the First World War that provided the catalyst for the Russian Revolution, and German aggression that would prove to be the Soviet Union’s greatest struggle. The series ends with footage of fleets of warships heading out to sea. It’s an extremely effective finale, one that shows Holmes at his most powerful, but also helpless in the face of an impending apocalypse. Holmes – like his audience – knows world war can’t be avoided, and that when it comes, it will consign his world of drawing room mysteries to history, render him quaint, quirky, something that sounds like it came from a storybook.

Track down the whole series, if you can. It’s available as a boxset in, I think, at least semi-legitimate form. It’s a beautifully-made, weird, faithful and fascinating version of Sherlock Holmes. 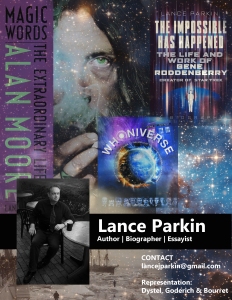